1. I kicked alcoholism out of my life, thanks to an ex-colleague's inspiring words. Not to mention kicking caffeine etc dependency.

2. My absolute favourite sports team in the whole world, the Westports Malaysia Dragons, kicked butt through the regular Asean Basketball League season and topped the league! Also, the Finals for the first time!

3. Wife, kids and I went on our most enjoyable holiday yet!

4. Workwise, also GREAT! My manpower supply company is now the biggest supplier in Malaysia! And the marine inspection business is also GOOD! We went overdrive into helping all Port Klang shipping lines clear their abandoned cargo and making Port Klang an even more desired port of call for the world's major shipping lines.

5. Wife's liver is doing ok. No sign of her cancer coming back after 7 years post surgery to remove parts of her liver. I think most people undervalue health as their greatest asset. I love you wifey!

Sometimes you think that wishing for greater things would be ungrateful even after having so many good stuff happen to you.
I think that if you dream about it, plan it through and really work for it, there's little reason why you wouldn't deserve better things in life.

PS. 2014 was not so great for our country and some people. Hint: They are tests of resilience.
Posted by Tiger at 12:19 No comments:

Email ThisBlogThis!Share to TwitterShare to FacebookShare to Pinterest
Labels: Happiness

Be big, hearted and all! 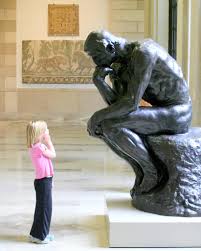 Be a big thinker.

You are what you think. 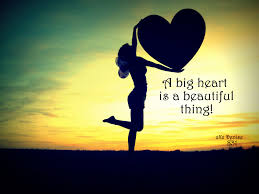 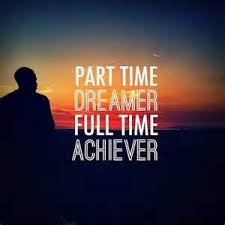 Be a believer and you'll be an achiever

The Art of Being Wrong - By Neil Strauss

I love the way this guy teaches. Neil Strauss is one hella person to learn from.


I love being wrong.There is nothing better than being wrong.In fact, it is often far preferable to be wrong than right.This may sound like a strange thing to say, especially coming fromme, but stick with me here and you too will make this your credo.Because when you're wrong, you learn more.And the more wrong you're willing to be, the more right you'lleventually become.But, unfortunately, many people struggle with admitting it whenthey're wrong. Others quite simply will never do it.In other cases, sometimes with very successful people (and this isoften their undoing), situations change or new information becomesavailable, yet they will almost stubbornly ignore it or reject it.One other common reason people have issues admitting they'rewrong is because they take criticism and feedback too personally.If a person tells them, "you did that badly," what the recipient hearsinstead is, "I am bad." And that leads to an emotional spiral.And so rather than listen, many people react.Instead of learning, many people defend.This is so prevalent that it's one of the key principles in RobertCialdini's classic book Influence. It's called Commitment andConsistency. Once people make up their minds, they tend not tochange them--even in the face of facts to the contraryThis leads to what we call a Fixed Mindset, as opposed to aGrowth Mindset. In fact, when we try people out for jobs here,one of the secret tests we conduct is to give them constructivecriticism on something they've done and see how they respond. Ifthey instantly start making excuses or justifying a mistake, theydon't ever get the job--because we know they won't grow in theposition.Here's a specific example of being wrong that you may remember:In The Game, I was excited during my first workshop when I receiveda phone number in front of Mystery. But afterward, he said I waswrong. I was shocked!But I didn't just dismiss him as an arrogant jerk who wasimpossible to please and out to get me. I was open to hearing why Iwas wrong. And he explained that I waited around like a puppy dogfor the phone number while the woman was flirting with another guy,and it showed low value. That was when he taught me cat-stringtheory: one of the great lessons that began my journey toimprovement.(And sure enough, Mystery was right: When I left her a message,that woman, whose name I still remember--Elonova--never responded.But that failure and the feedback that came with it paved the wayfor countless successes.)Tragically, a lot of people in the Game "community" think thatbeing an "alpha male" means never admitting your wrong. This is nota trait of an alpha male--it is a trait of an insecure male, andwomen can see right through it. In fact, one of the qualities of aman of substance (the term alpha male has been largely coopted byweirdos) is: not conceding a point when you're right, but admittingyou're wrong when you're wrong. That is what secure people do.One might think this idea does not apply to people who've achieveda level of mastery. That is not true: the better you are atsomething, the more paying attention to good feedback will allowyou to make an adjustment that will have a powerful effect on whatyou're doing.It could shave 1/10th of a second off an Olympic swimmer's time andget them the gold medal. Or it may allow someone who's built abillion-dollar company to modify their strategy in order to keep upwith changing times that otherwise would have bankrupted theircompany.However, in order to admit when you're wrong, you need to knowwhen you're wrong. And this requires a secondary skill you mustcultivate. It's called good judgment.Because sometimes, let's face it, you ARE right and everyone aroundyou really is wrong. As one philosopher put it, "Talent is like amarksman who hits a target which others cannot reach; genius islike a marksman who hits a target which others cannot see."So how do you know when to listen and when to persevere, when thecritic is right and when it's really just about them, when tochange and when to stay the course?So to summarize today's lesson: Those who are never wrong arerarely right.
Posted by Tiger at 12:52 No comments:

My Christmas And New Year Wish For You:

I Promise This To Myself Today
I am living my life by design, not by default.

I am NOW rising to my vision and am doing
whatever it takes to achieve my life's goals and dreams.

I am smart and I have everything I need to grow and
develop into the person I know I am inside and
deserve to be on the outside.

I am NOW releasing anything that is holding me back.

I am NOW forgiving myself and anyone else
that has held me back.

I am NOW choosing freedom over fear
and I am ready to rise.

This is my year to shine, my year to achieve and
my year to break free and BECOME ALL THAT I CAN BE.

May your life be abundantly blessed and filled with love, joy and peace. May all of mankind be blessed today too and throughout the New Year.

Merry Christmas and a Happy New Year!
Posted by Tiger at 12:24 No comments:

Nobody is stronger, nobody is weaker than someone who came back.

There is nothing you can do to such a person because whatever you could do is less than what has already been done to him. 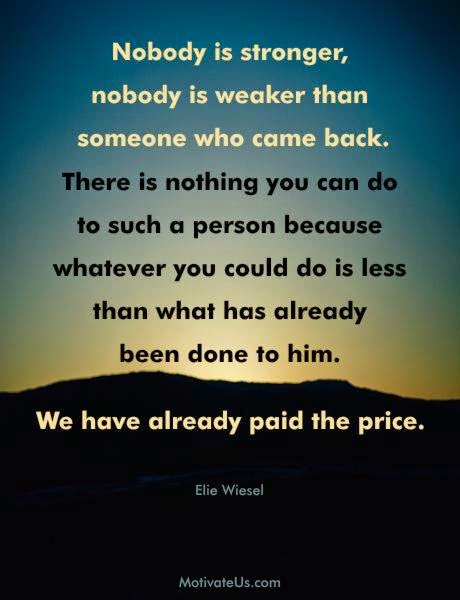 We have already paid the price
Posted by Tiger at 10:47 No comments:

Speaking up for the majority - I am number 26

Just signed an online petition, in support of the Group of 25.
Take a moment to read why we must speak up. And then sign the petition too.

A man, whose family was German aristocracy prior to World War II,
owned a number of large industries and estates. When asked how many German people were true Nazis, the answer he gave can guide our attitude toward fanaticism.

Very few people were true Nazis,' he said, 'but many enjoyed the return of German pride, and many more were too busy to care. I was one of those who just thought the Nazis were a bunch of fools. So, the majority just sat back and let it all happen. Then, before we knew it, they owned us, and we had lost control, and the end of the world had come.

My family lost everything. I ended up in a concentration camp and the Allies destroyed my factories.'

We are told again and again by 'experts' and 'talking heads' that everyone just wants to live in peace. Although this unqualified assertion may be true, it is entirely irrelevant. It is meaningless fluff, meant to make us feel better, and meant to somehow diminish the spectre of fanatics rampaging across the globe in the name of race or religion.

The hard, quantifiable fact is that the peaceful majority, the 'silent majority,' is cowed and extraneous.

Communist Russia was comprised of Russians who just wanted to live in peace, yet the Russian Communists were responsible for the murder of about 20 million people. The peaceful majority were irrelevant. China's huge population was peaceful as well, but Chinese Communists managed to kill a staggering 70 million people.

History lessons are often incredibly simple and blunt, yet for all our powers of reason, we often miss the most basic and uncomplicated of points:

peace-loving moderates have been made irrelevant by their silence.

Peace-loving moderates will become our enemy if they don't speak up, because like that example from Germany , they will awaken one day and find that the fanatics own them, and the end of their world will have begun.

Peace-loving Germans, Japanese, Chinese, Russians, Rwandans, Serbs, Afghans, Iraqis, Palestinians, Somalis, Nigerians, Algerians, and many others have died because the peaceful majority did not speak up until it was too late.

Remember to sign!
https://www.change.org/p/the-prime-minister-of-malaysia-i-am-26?utm_campaign=responsive_friend_inviter_chat&utm_medium=facebook&utm_source=share_petition&recruiter=42283461
Posted by Tiger at 13:54 No comments:

"To try is to risk failure. But risk must be taken because the greatest hazard of life is to risk nothing. The person who risks nothing does nothing, has nothing, is nothing. He may avoid suffering and sorrow, but he simply cannot learn, feel, change, grow, live, and love."
-- Leo Buscaglia 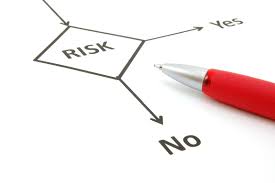 Daring to risk is an essential step to self empowerment.
This is the key to breaking out of stuck thinking and behaviour.

It is about breaking through the comfort zones and barriers. 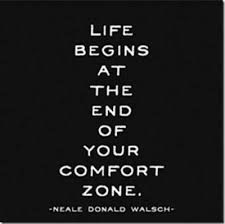 "A life spent in making mistakes is not only more honorable, but more useful than a life spent doing nothing."
-- George Bernard Shaw

Proud to be a

Towards a greater country for all

Quote of the Day